We’ve been making games for a long time, and we have quite a lot of happy, and above all – loyal players, who keep on playing!  Here’s some information about some of the recent things we’ve been working on that have made a really big difference to us!

TL;DR : This is an article intended for game (and app) developers, about increasing the total number of users over time.  Summary : Retention matters more than Acquisition!  Read on for more info!

Acquisition is (relatively) easy by advertising, and of course improving marketing/cross-selling/app landing pages, etc.  Changing our review and rating system built in to the games has really helped with this!

While there are lots of ways of getting more people to try an app, most of them have a cost.

The free things that can improve acquisition include:

If advertising for a game, there’s a definite cost attached.  If the cost to acquire a user exceeds the average revenue you make, then you’ll lose money, so it’s essential to make sure you know how much acquisition costs and how much revenue you make on average from a player over the entire time they have your game installed and running.

Retention is about how long the user keeps the game. Especially for games which generate revenue by having paid items (IAPs) or advertising (interstitials, rewarded ads), it makes a huge difference to the total revenue.

Retention certainly matters more than acquisition – if we keep people for longer (by keeping them happy), and still provide ways for them to give us ongoing revenue, then we improve our total revenue the most.

The ‘Lifetime Average Revenue Per User’ – LARPU – is ultimately what really matters much more than how much a customer buys on day 1.

We use Flurry to collect a certain amount of analytics about the usage of our games, partially for event tracking, partially for tracking any problems that happen, but also as an overview to track things like retention and usage rates;

This article at Flurry has some great info about what’s a normal retention and usage rate for various categories of apps, and from that this chart is especially helpful: 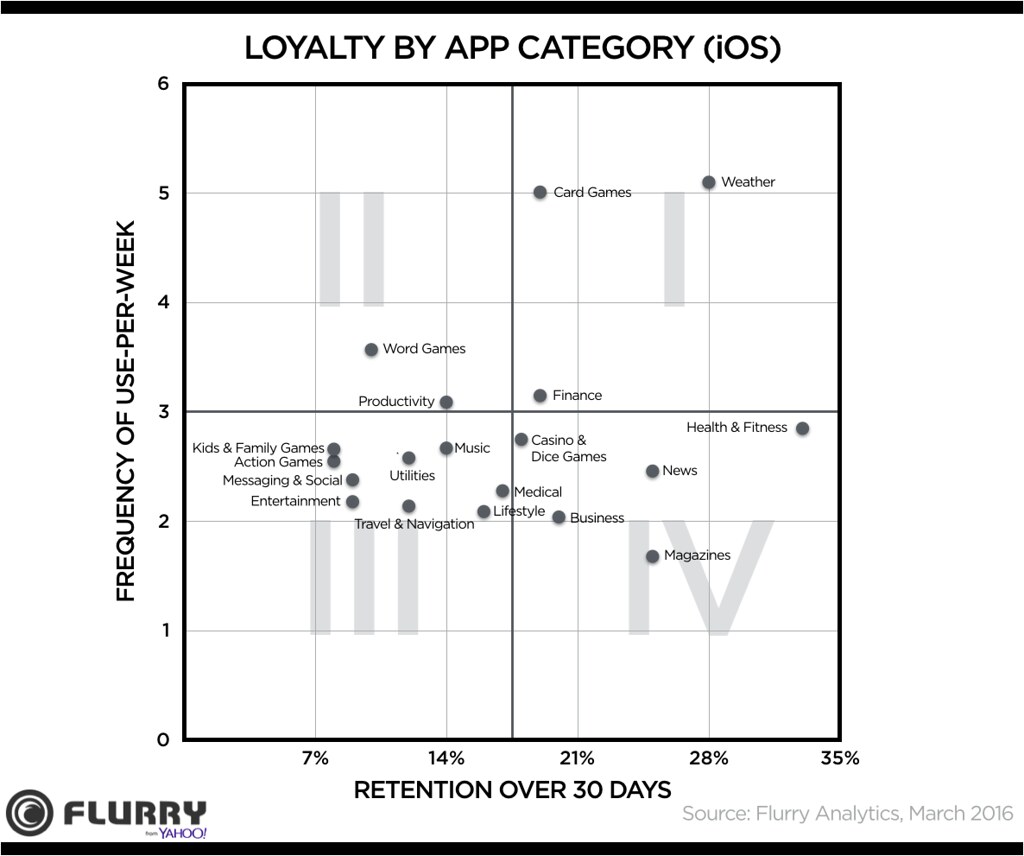 Retention and Frequency of use by App Category

We expect many of the new installs – because our game is free – to be uninstalled (or unused) fairly quickly.

Here’s an example of our retention of new users, for our iOS version of Astraware Acrostic, by week;

This means that about half of the people who install the game keep it beyond the first day (D1), and half delete it within the first day. We reckon that’s pretty good for a free game!

Of those who keep it beyond that day, 74% are playing a week later (D7), and 44% are still playing after a month (D30). Apparently that’s a good set of values, which was nice to discover!

We did a lot of work about retention over the last year to achieve this!

We’ve worked on the ‘onboarding‘ process (don’t blame us for the term!), which is about encouraging the players to stick with the game beyond the first few seconds, to get them through their first successful game and for them to see what it’s all about. Dori Adar has a great slide deck about this! Our take on it was to make it as easy as possible for people to know what to do to get into their first game as quickly as possible, and to enjoy their first experience with the game.  We don’t overload with nags, we keep the interface easy (with a few subtle hints with glow effects to draw attention to some appropriate buttons), and we make sure that the player doesn’t get an ad for their first game (in fact, we make sure they get at least 5 ad-free games, before introducing an explanation about ads and then having them at the end of games.)

Improving the onboarding is immediately shown by a change in the D1 value, so is extremely measurable.  We still have some ideas to make things a bit better for that first launch ‘experience’.

We also worked on the retention rate in general, which reflects better in the D7/D30/D90 values.

We give people daily content with extra available each new day. The changes we made were to let people catch up at any time for any of the past week’s puzzles, and we added a second puzzle each day, meaning much more free content available especially for anyone who didn’t check every day.

We also increased our number of built in “free” puzzles from around 12 to around 60, giving the average user a few hours worth of completely free puzzle play extra.

Most recently we added extra puzzle streams (ad supported) so that nobody should get to a point where they completely run out of available puzzles.

Incredibly (and wonderfully) we have players who have been playing our daily puzzles for several years – some of them are happy to watch an ad each game, some prefer to buy the In-App Purchase which makes the daily puzzles ad-free.  Both are great for us!

It’s good that many players do eventually build playing our game into their normal daily/weekly routine, but we do acknowledge that we’re not quite as good at keeping players beyond 6 months as we would like to be.

Again, we still have more to do, in particular we want to do better linking with social media (Facebook) so that players can more easily compare results with their friends, which we hope will keep many more people enjoying the game (together) for longer!

Some of the ideas we have in some games, and some others planned

For a game to become part of someone’s habit for over a year is quite an honour – it’s become part of their lives. We know we’re doing some things well when we see a user who gets in touch who has played several hundred daily games!

So, if everything works well, and the cost of acquisition is less than the LARPU, at some point we make profit!

Well, that means we make some net revenue per user… we still have to factor in the cost of development!

Right now we are only spending on very inexpensive acquisition, Apple Search Ads, Google Ads, etc, where we can put in a disgracefully low bid for keywords that make sense for us.  For our ‘paid’ acquisitions like this, our average cost per extra user is around $0.10, but the number of users we get at this rate is fairly low.  We can increase the number by increasing our bids… but then the average cost goes up.

Our LARPU is much harder to calculate, it is very game dependent!

The average time a user plays our games is trickier. Many of the users uninstall straight away; Of those who keep the game beyond the first day, the average time they keep the game running for is about 24 days, but there’s a very wide range! (Those who we convert to multi-month players will stay a very long time!).  A player who plays a reasonable number of the daily games for 24 days will see (if we’re lucky) about 10-15 adverts, which will be an average value of about $0.08 to us.  (Our current eCPM for adverts is about $5 on average).

So our LARPU is the IAP revenue plus the Ad revenue – or about $0.15, and splits almost evenly between ad revenue (free players) and IAP revenue (players who purchase).

Wow, that’s not a huge value… but it means a profit of about $0.05 per user if we’ve paid to acquire (by advertising.)

There are companies out there who are happy to ‘sell’ installs of your game – they incentivise players to try out your game. As a developer you pay per user who makes it into your application (having gone through the install process, and launching the game, perhaps to a minimum level of activity.)   I have had quoted values of $0.50 up through $2.00 or more per install!  Obviously these would not be economical in our case.

All users are equal, but some are more equal than others

It may be no surprise, but users who have deliberately searched for your application (in general, or specifically), are those who want to use it!

Then there are those who saw an advert for it as they were doing something else, and thought they might give it a go.

Finally, there are those who are ‘incentivised’ to try the application, not because of the app itself, but because of a reward they’ll get elsewhere.  These users are the least likely to stick with a game (but they still might!)

We cross-promote our games where it makes sense – the player of one of our word games is likely to be interested in others too. If someone has had a good experience in one of our games, they’ll already know the user interface for the next, and they’ll hopefully be warm to the next game already, and more likely to stick with it. We can cross-promote almost for free, which is brilliant! ( Building cross-promotion systems into your apps is a good idea!)

We get lots of users who are searching for games of our types in general, and some will try our game if they see it.

We pay for some adverts to come up within searches. Hopefully we’re still advertising to people who are interested in the game, so should still be fairly good value.

We haven’t (yet) tried advertising in general – i.e. in other people’s games, but for that we need to be able to advertise for lower cost than we’re likely to make back.  If our average user gets us $0.15, will someone we’ve found by advertising get us the same?  That’s something the revenue/attribution/tracking companies are real experts at working out – and why all the big companies really focus on this too!

We currently think much more about retention (keeping existing users) than acquisition (getting new users); We’re not the only ones to realise this!   We’ve learned a lot from other developers who’ve shared their experiences online and at various conferences, and the choices we make are about the overall retention and ‘LARPU’ rather than making a quick profit!

Why we love Freshdesk!

How we improved our ratings for Astraware games